As standard there are a whole range of power options across the model years to pick from. The major difference between the variants is the type of turbo fitted. There are two options; The IHI (IHI VL38) turbo, and the Garrett GT1446) turbo.

The IHI turbo, specifically the IHI VL38 is fitted to 135, 140, 145 and 160 PS variants throughout the years. This turbo is very small, and as a result exhibits very good spool and low turbo lag. Unfortunately it is limited in its ability to make huge top end power.

The IHI Turbo can be identified visually quite easily. It has IHI Turbo cast into the compressor housing as shown below: 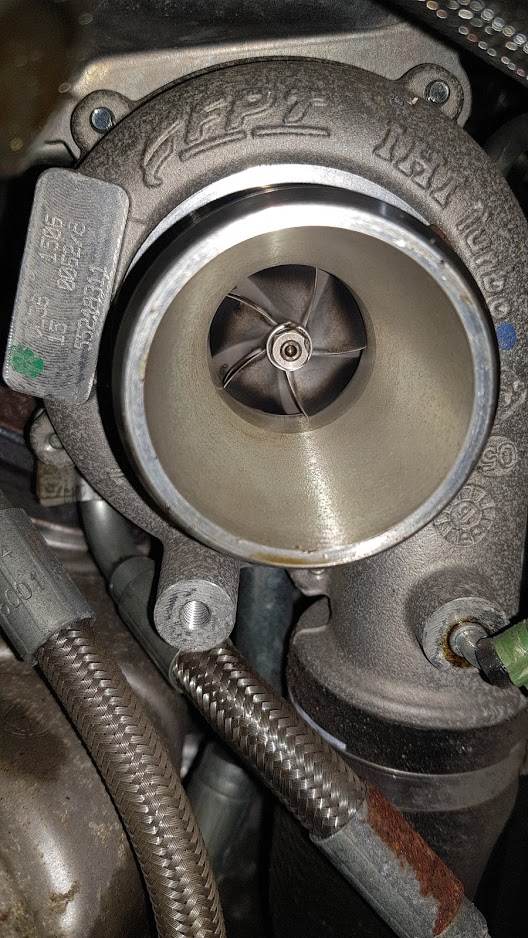 It also has an actuator that is mounted at around 45 degrees, with the actuator canister permanently fixed to the actuator bracket: 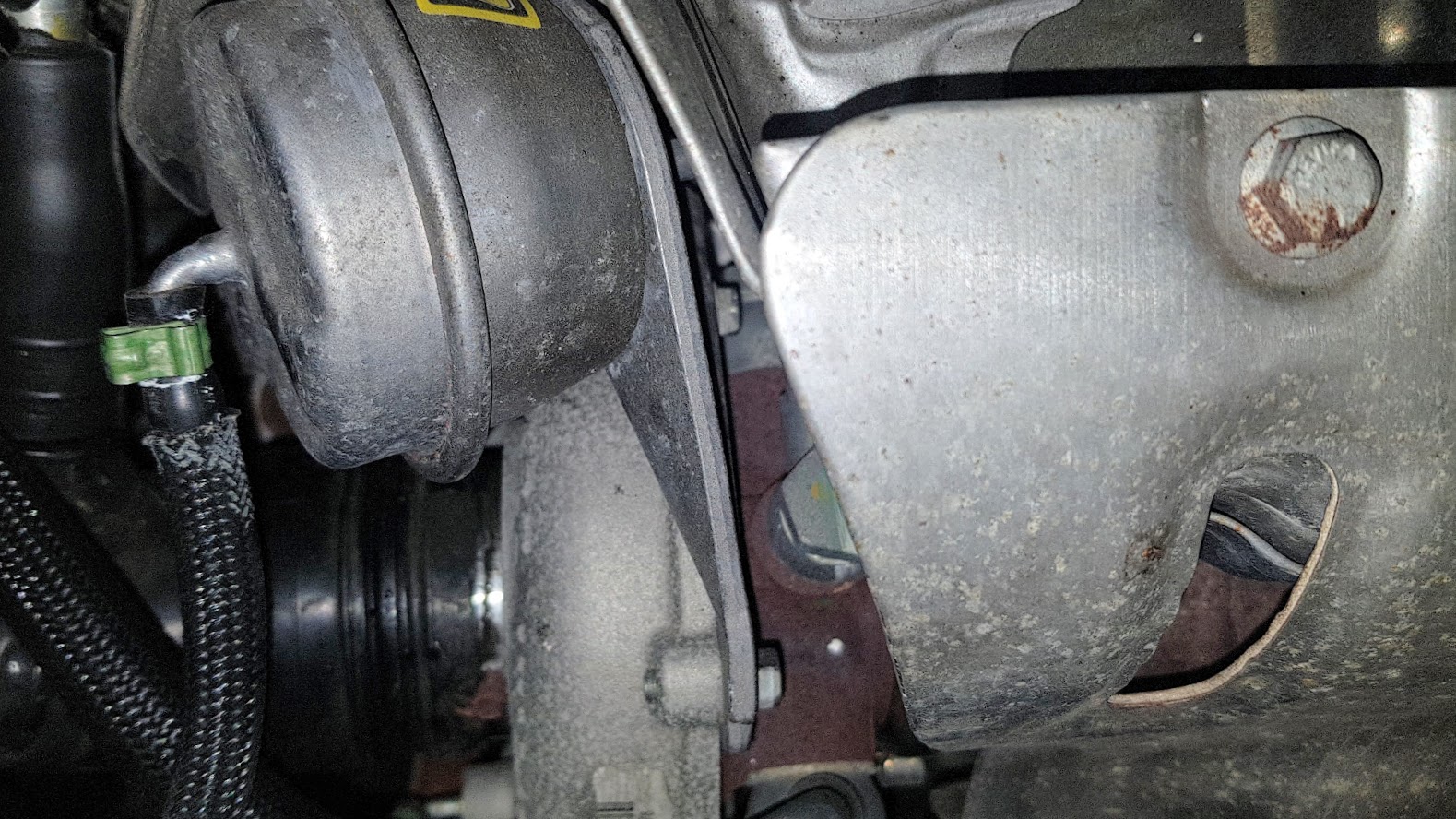 The Garrett turbo, specifically the Garrett 1446 is fitted to 165, 180 and 190PS variants. This turbo is slightly larger, and as a result exhibits better top end power, at the expense of a slightly higher boost threshold, resulting in more percieved lag.

The Garrett Turbo can also be identified quite easily: 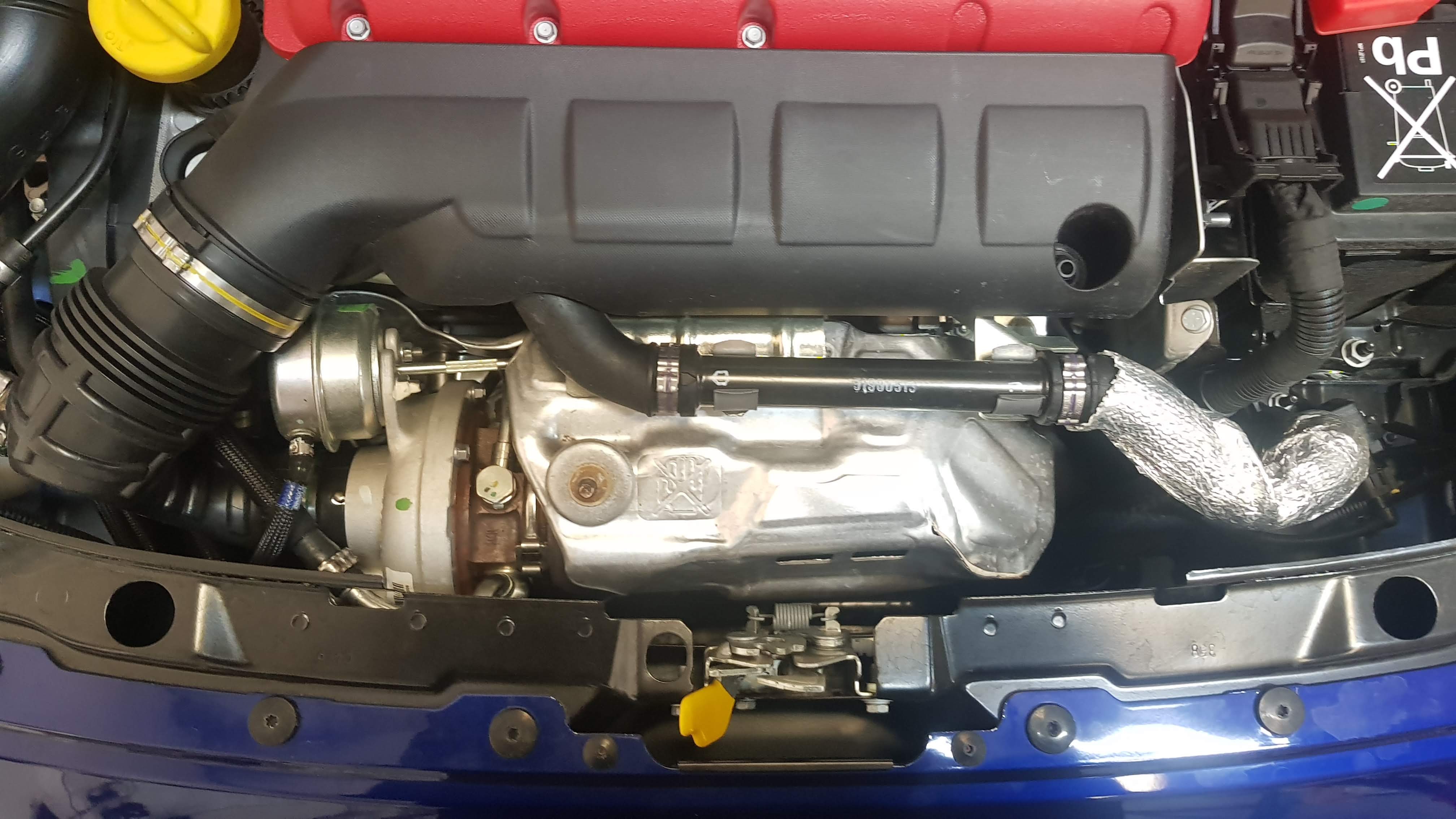 Its actuator is mounted with nuts onto the compressor housing and is mounted relatively square when compared with the IHI actuator: 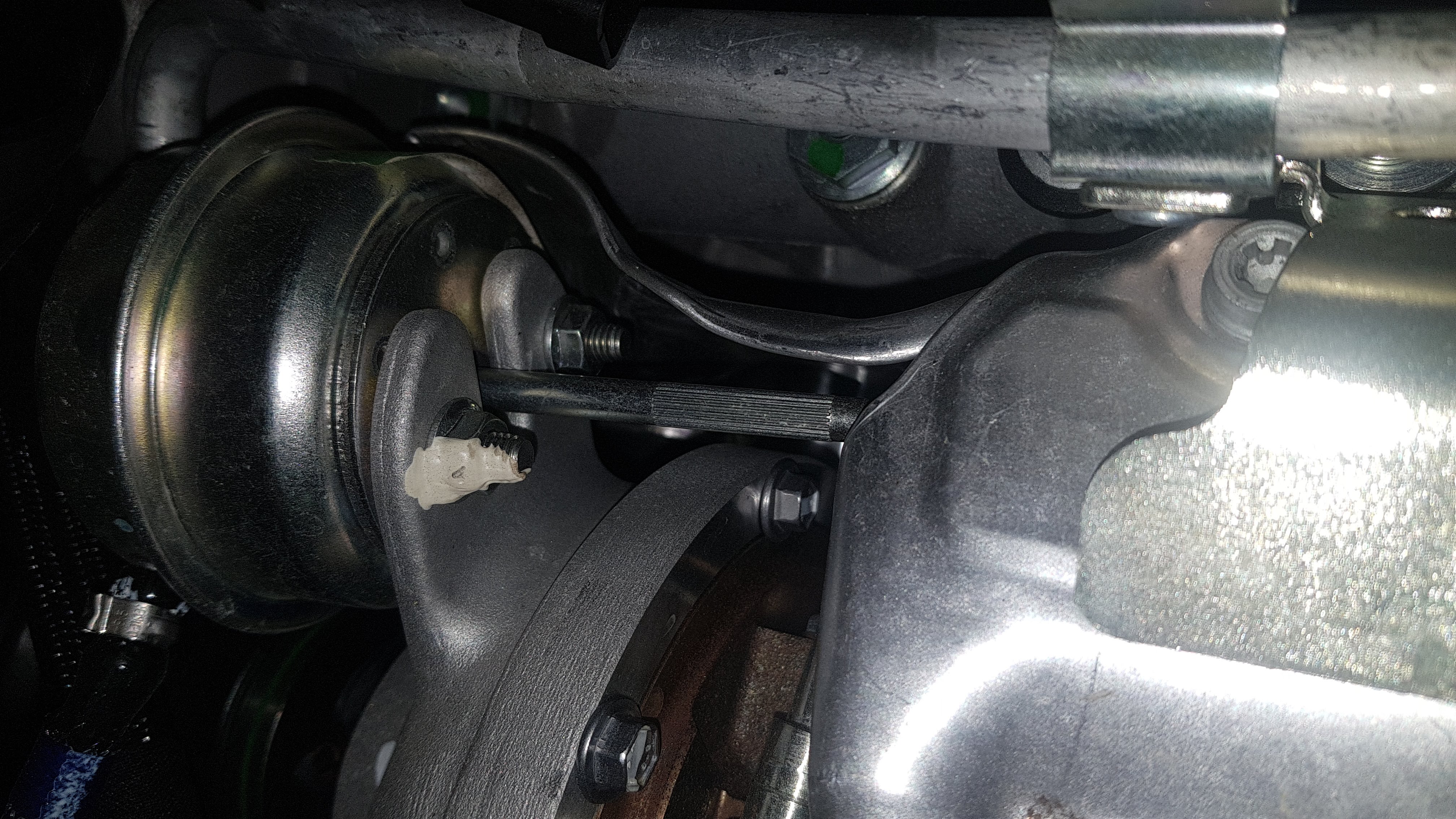 With the IHI turbo we are limited in terms of maximum power at maximum RPM, yet we have huge potential further down the rev range.

Just as an example with the IHI turbo, here are some stock graphs overlaid from our previous dyno results. These show both 145 and 160PS factory models compared on the same graph, then a 145PS model with our unit fitted: 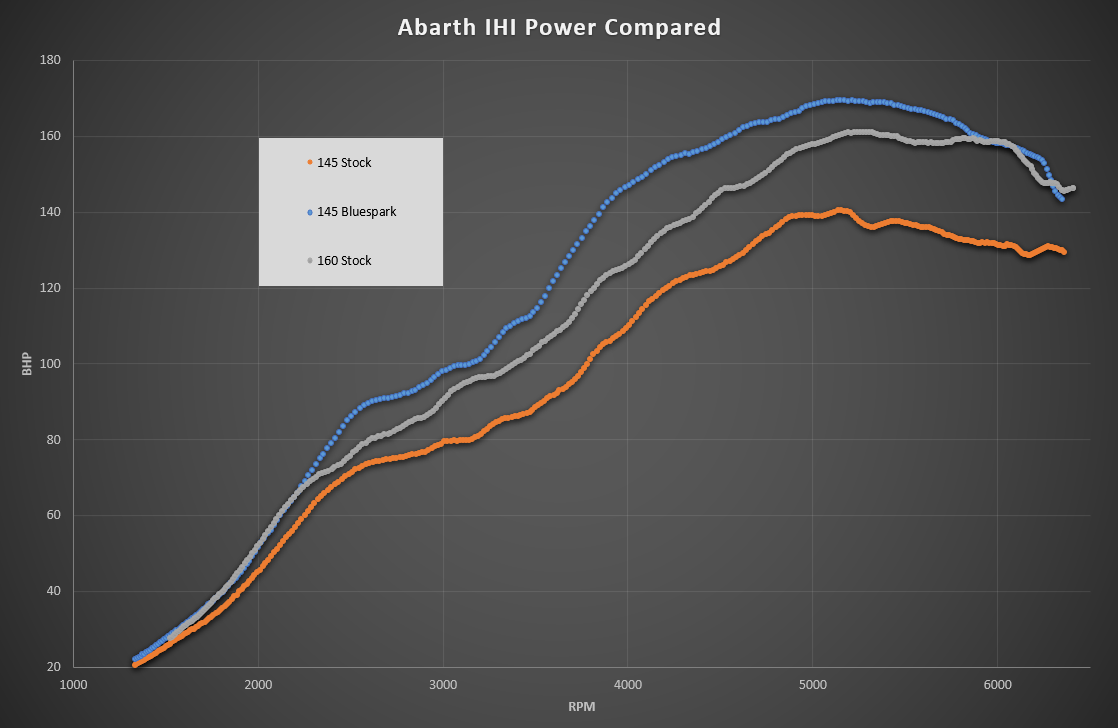 As you can see, the factory 160PS car is more powerful than the factory 145PS car everywhere in the rev range.

With our Bluespark unit fitted however, the 145PS car makes more power than the factory 160PS car across the entire rev range.

You can see that below 2250RPM the 145PS car with the Bluespark unit fitted follows the same exact curve as the 160PS factory car as the turbo comes on boost.

You can see that it is without a doubt worth fitting one of our units if your have a factory 135, 140 or 145PS model.

We are often asked whether it is worth tuning the 160PS factory engine, as when you only look at peak figures, gains of around 12-15hp don't seem like a lot.

Despite the fact that peak gains are limited, gains in the rest of the rev range are still absolutely fantastic:

At 3300 RPM the car is now making a 33hp gain vs stock! There are strong gains in torque from low-rpm, maintained throughout the mid-range. The peak figures are 174hp, a 14hp gain vs stock.

When looking at figures stated for any tune, be careful to look at what they are based upon, and always ask for a graph that shows before and after figures. One remap might claim 180hp, but if their dyno is "generous" and reads a factory 160PS car as 170hp as standard, a "180hp" figure would only be a 10hp gain. In any case, the IHI turbo typically limits the car to a maximum gain of around 20hp above stock on a factory 160 model, or 35hp above stock on a factory 145PS model, even with a host of complimentary mods. 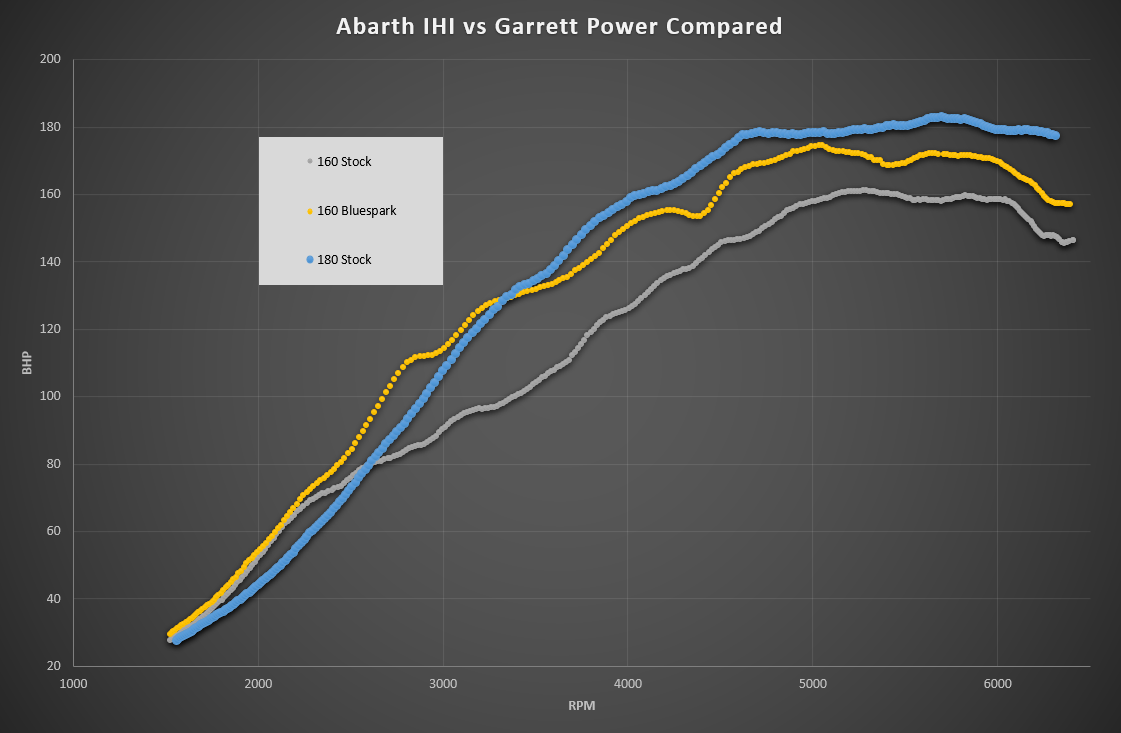 The factory 180PS car does however make significantly less power than the factory 160PS car below 2500RPM, with the 160PS car with Bluespark making more power up to 3300RPM.

This illustrates well the differences between the turbos, and between the factory 180 car and the Bluespark 160 car, there would be very little in it in a real world situation.

Next we will see the differences when adding our 3 channel tuning module to the factory 180PS car: 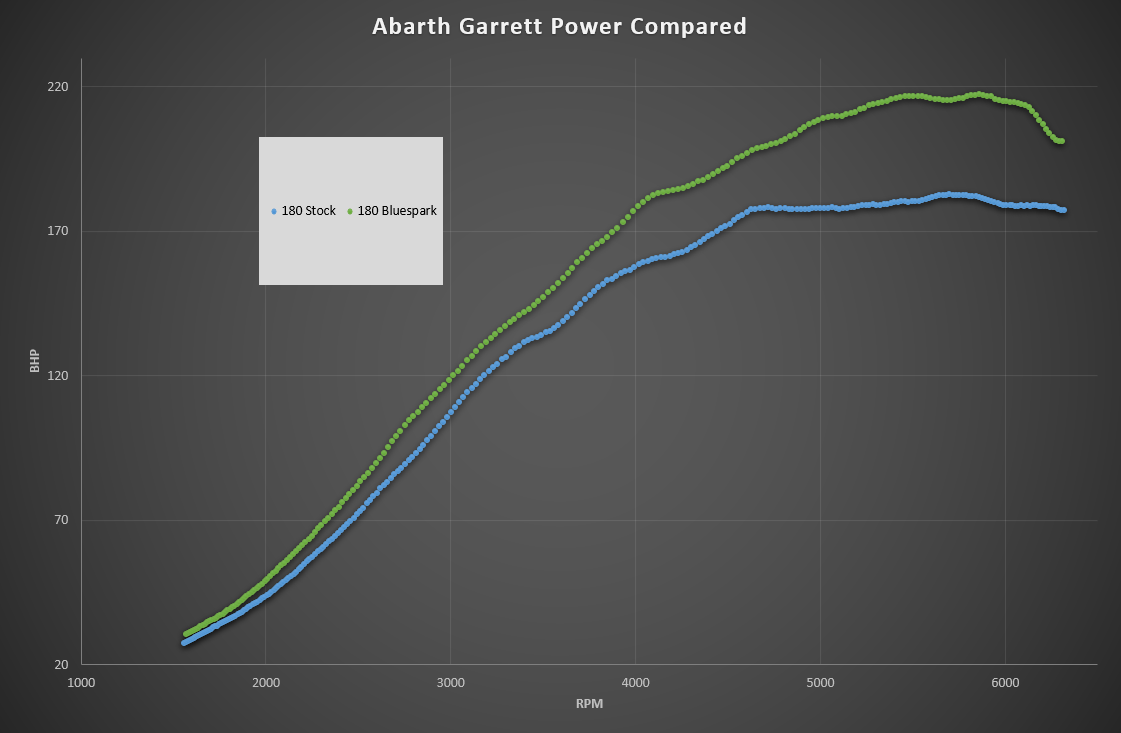 The car now makes slightly improved power at the bottom end of the rev range, eliminating some of the turbo lag. The biggest gains however are at the top of the rev range where it now pushes on to over 217hp.

All these results are made with standard vehicles, however we will be making further updates to this guide after definitively testing some other performance modifications.

If you are interested in what we could do for your Abarth, please take a look at the relevant link below or our Abarth Tuning page: