Effectively the same engine is used in their full range of "20i" vehicles (120i, 420i etc) but also in higher powered variants such as the 225i, 330i and 430i producing vastly different power outputs.

We had the task of extracting power from this 320i and got to work datalogging the car, finding its limitations and improving performance.

After strapping the car to the dyno as standard we got a pretty good baseline of the stock figures produced. After doing several runs for consistency, it made 191.1HP. This is a little over the BMW quoted power figure of 184PS, but it also produced ever so slightly below the quoted torque figure of 290Nm torque with 286Nm produced.

These figures are perfectly within tolerance and showed that the car was fit and healthy before we continued.

Looking at the stock graph we can see that stock torque looks like an extremely flat line, as does peak power. This is a strong tell-tale sign that the manufacturer has implemented software control to hold the engine back in order to make the figures the marketing department are looking for. Another sign is that at around 1900RPM torque makes the target value, then quickly dips down again. The same thing happens on the power curve (although less obviously) at 5000RPM.

We have encountered this kind of OEM strategy on several previous cars. Rapid reactions are characteristic of a throttle closure strategy, so the first thing we look at is a datalog of throttle position across the rev range:

The dashed line above shows throttle opening. Despite having my foot flat to the floor, the car's own ECU is in control of the position of the throttle plate. At the exact points previously mentioned (1900RPM and 5000RPM) the car is closing the throttle plate (against the driver's wishes!) in order to deliberately reduce power and torque.

We can see the effect this has on manifold pressure in the following graph:

The dashed line above shows manifold pressure and we can see it sharply reduce manifold pressure from 1900 to 2200RPM and also from 5000RPM onwards. Throttle closure is a very fast acting way of regulating manifold pressure, but particularly at the top end, the car is very deliberately being held back.

We fitted our latest 3 channel tuning system and started working on a file for the car: 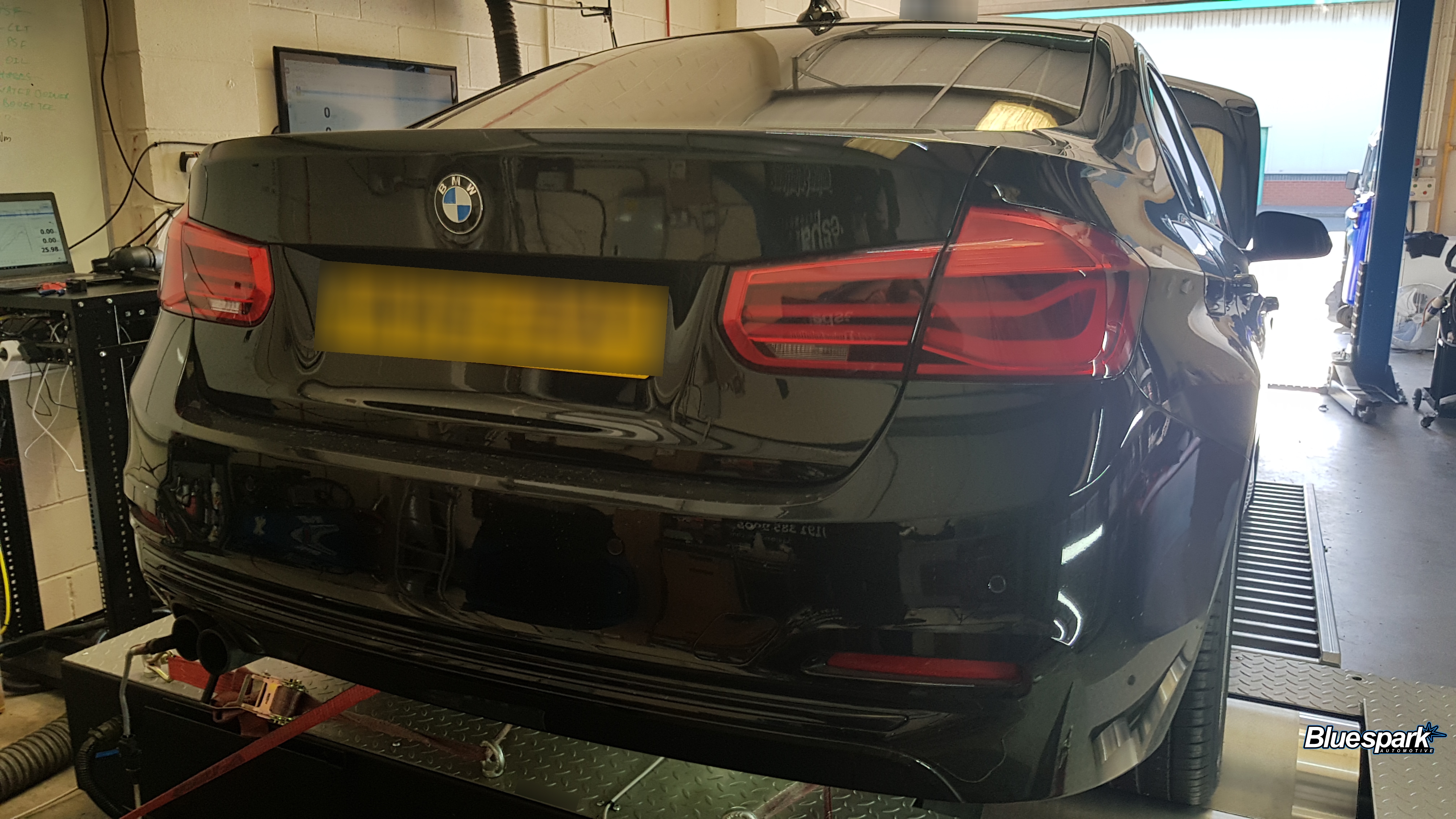 As you can see, the unwanted throttle closures have been eliminated throughout the rev range, allowing the car to make significantly more power and torque.

In the following graph you can see power and torque plotted vs the car as standard:

The car is now making 250hp and 374Nm of torque. A 59hp and 88Nm gain vs stock! There are strong gains in torque from low-rpm, maintained right up to redline. The power curve is also smoother than the stock power delivery.

To finish up we double check that everything is as it should be in terms of air fuel ratio, trims, and fuel pressure throughout the rev range, and then gave the car and extended road test to ensure drivability and delivery was good.

The car is far more eager than stock, pick up is much better and it pushes on much more eagerly.

The final results are very close to those offered by many flash tunes, but with the advantage that our unit can be tracelessly removed in under 5 minutes.

Additionally if you change vehicle in the future, our unit can also be reprogrammed for only £60.00.

If you are interested in what we could do for your BMW, please take a look at the relevant link below or our BMW Tuning page: