Diesel Particulate matter is a fancy name for exhaust soot.

The black soot that we typically associate with "dirty" diesels is Particulate Matter (PM). 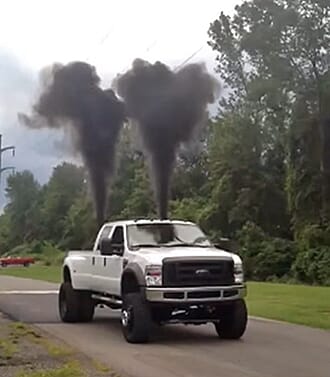 The plumes of thick black smoke from old buses or British Rail trains used to be common sights, but are increasingly a thing of the past.

The primary reason for this change is that almost all Diesel engines, from cars to buses and trains are now fitted with DPF's and modern engine management systems.

With emissions standards on PM further tightening, engine management solutions alone were no longer able to reach these targets.

The mid to late 2000's saw the introduction of the DPF across a range of Diesel Vehicles, by 2010 them being commonplace.

The DPF is a ceramic filter that traps larger soot particles that have not been burned in the engine. It is not designed to store them permanently, it is intended to merely trap them in order than they can be more completely burned before leaving the tailpipe.

Typically A DPF will not only reduce overall mass of soot but also the number of particles. As soot particles of various sizes become trapped, they have a tendency to collide and agglomerate.

A DPF is able to break down particles in two different ways:

On longer drives under high load the DPF may get hot enough to oxidise trapped soot. This has no extra fuel cost, and simply burns away the soot in the course of normal driving. Soot is rapidly oxidised at around 600°C, but can be oxidised more slowly at lower temperatures.

Engine management systems use combinations of active and passive regeneration, what is possible massively depends upon how the car is used.

The temperature sensors are used to monitor the temperature of the gases flowing through the DPF. This helps the engine management system to control an active regeneration, maintaining the target temperature without either getting dangerously hot or failing to get hot enough.

The pressure sensor (connected by pipes and hoses) is used to monitor the pressure drop across the filter. As the filter becomes progressively more blocked, the pressure drop will increase. Once it reaches particular target values, the engine management system will initiate regeneration strategies in order to clear the trapped soot. When well designed and on a well maintained vehicle, a DPF should:

Often customers call us asking if we can remove their DPF on road vehicles. We don't do this, and its always something that we would advise against. Not only could it cause problems with MOT, Insurance and the DVSA, its also usually totally unnecessary. Properly maintained, a DPF should last the lifetime of the vehicle.

Problems with DPFs can be down to:

Failure to maintain the exhaust system

If the exhaust pipework prior to your DPF is compromised, the DPF will become blocked and unable to regenerate.

This is most common on vehicles with an exhaust "flexi" joint prior to the DPF. Is this starts to leak, the pressure reading across the DPF is registered as lower than it is. This means the engine management system is not aware of how blocked the DPF really is.

Failure to maintain the vehicle's engine

Without a DPF, if major issues such as boost leaks or leaking injectors are ignored then the vehicle may emit smoke from the exhaust and get poor fuel economy, but long term damage may not occur. When a DPF is equipped, these types of issues can cause the DPF to become quickly blocked, often eventually requiring professional repair.

This is a less common issue than is often implied, but is still a potential issue. Ordinary driving with the occasional stop-start journey will not cause you DPF issues, and you don't need to spend most of your time on the motorway for modern Diesels to effectively regenerate. That said there are situations where a DPF equipped vehicle is unsuitable:

If you very rarely do more than 10 miles in a journey, a modern Diesel is a poor choice. Fortunately this applies to very few motorists. If this does apply to your situation a petrol vehicle may well be a better choice.

A poor quality remap or tuning box can cause major DPF issues. Injecting too much fuel and causing excessive smoke can quickly block your DPF.

If you would like a tuning solution designed to work in harmony with your DPF, please take a look at a DPF friendly tuning box from our range.